In my newsfeed this morning: Surgery Not Required to Change Gender on Passports, which appears to be mostly good news. For one thing, it's an instance of the government actually listening to a trans advocacy group when formulating policies that affect trans folk. I know that seems insignificant, but...baby steps y'all.

On a totally unrelated note, I got in a bit of trouble with friends last night for saying that we shouldn't be cleaning oiled seabirds and other animals in the Gulf. According to the studies I had previously read concerning the Exxon Valdez spill, the effort to clean up and rehabilitate seabirds that have been mired down in crude oil is a very public but token waste of resources. It looks good and makes for good (considering the circumstances) PR for the company at fault as 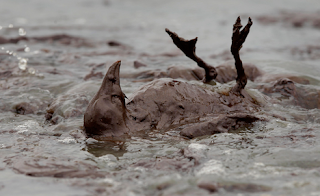 well as companies like Dawn. And nobody wants to admit that the birds and turtles and dolphins who are exposed are goners and we would be much kinder to quickly euthanize them rather than letting them die a slow and painful death. But... it turns out I'm right about this. And it really does suck. We don't want to admit it. We want there to be a happy ending, and for someone to be doing something. But in reality, continuing to capture and transport and scrub up and then release these birds is simply a way to make us feel better at the animal's expense. And that's just cruel.