This morning on NPR there was much talk of Elena Kagan's confirmation hearings. In one clip, Jeff Sessions mentioned that he would like to mansplain to her how supreme court justices serve under the constitution. It's interesting how gender is so clearly present in the very language they use in these cases. If the ranking member on the Senate Judiciary Committee happened to be a woman, and the dean of Harvard's Law School and Supreme Court nominee happened to be a man, I doubt we'd hear much talk about whether or not the nominee "understands" the role of the constitution in supreme court decisions. There might be talk of interpretation, about whether the nominee views the constitution as a living document, and undoubtedly the perennial talk about "activist judges" would occur. But framing it as a lack of understanding is a distinctly male thing to do when the person who allegedly lacks the understanding is female. Apparently getting a grasp on the basic workings of our supreme court is just too much to ask of any ladybrain, even when that ladybrain has been educated at and affiliated with law schools that make Huntingdon College and the University of Alabama look sort of ... provincial and benighted. 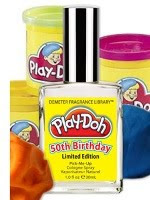 I'm told there's a play-doh scented perfume out there, which is kinda awesome, if any product of the the beauty-industrial-complex can be awesome. I tend to think that anything which issues forth from such a problematic source is inherently problematic, but if you have to have perfume...


Then there's this: Baby’s first bacteria depend on birth route, featuring a study showing that babies born via c-section lack a wide range of bacteria on their bodies that babies born by vaginal birth have. The current speculation is that these bacteria are of the beneficial type, since babies born by c-section experience higher rates of allergies, asthma, and various immune-system issues. Of course, babies born by c-section also tend to have more issues with breastfeeding, which makes sense given that babies who were born vaginally had lots of lactobacillus (the good stuff in yogurt that helps you digest milk) on their bodies, while c-section babies had lots of the scary stuff like staph. Interestingly, most of the early feedback from the medical community reveals that, rather than using this as a reason to work to reduce c-section rates, the medical community would simply come up with a pro-biotic mix to administer to babies born by c-section. In other words, it's the same old "anything a woman's body can do, we can do better" song and dance.


A new study found a fairly effective way to predict the age at which a woman will hit menopause, potentially giving women more control over their reproductive lives. But experts worry that women will "become too reassured by this." I'm interpreting this warning about becoming too reassured as a preemptive means of holding onto the fear-mongering tools based on women's "biological clocks." Because losing the power of intimidating women with the threat of childlessness is a tough prospect to face.


Finally, police in Toronto are taking a preemptively violent approach in dealing with G20 protesters. In 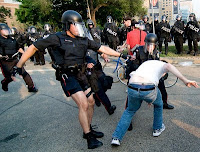 order to avoid some of the bad PR they might earn from this, they're also using plain clothes officers and trying to isolate smaller groups of protesters and remove them in unmarked vans. Of course, the most violent thing most of the protesters seem to have done was make a lot of noise banging pots and pans together. Which is totally the kind of offense one ought to get beaten and imprisoned for.