In honor of the most wonderful time of the year.

As a service to the corporatocracy, I would like to remind you that your family won't know you love them unless you embark on a crazed, irrational buying frenzy this weekend which will cause your stress level to spike through the roof, drive your family deeper into debt, and cause serious longterm environmental degradation. Hopefully your crazed consumer frenzy started today. It really should have started yesterday, it turns out. And if you don't get on it this weekend, you're doomed. Cheers!


The lyrics:
All the garbage that you have thrown away
Is waiting somewhere a million miles away
Your condoms and your VCR
Your ziploc bags and father's car
Dark and silent it waits for you ahead 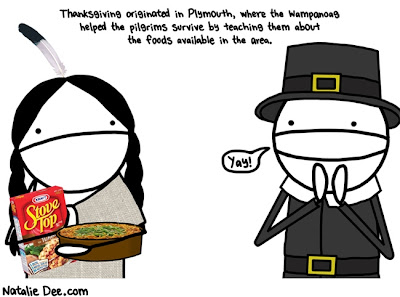 In honor of the weekend, a drink recipe.

Dump a bunch of ice in a glass. Squeeze a whole lemon and dump it in. 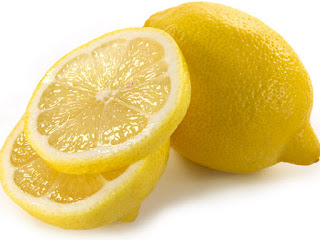 Add 2 shots of whiskey. Not Jack Daniels. Some other decent whiskey.

Add a squirt of agave nectar and top it off with a splash of cold filtered water. Stir it all up.

The sponsors of American Idol are trying to forcibly remove this video from Youtube, so you should probably watch it and see what has them so freaked out:

via My Plastic-Free Life
3 comments

On the one hand, there's my childhood experience of college football. When I was a kid, college football was a central part of the transition from summer to fall each year. Most Saturdays would find me in Husky Stadium with my dad and uncle and siblings and cousins (or getting up insanely early and driving to Eugene or Corvallis or Pullman for away games). We'd meet up late morning at my cousins' house, stuff our pockets with snacks, and head toward the stadium with the crowd of other fans heading down the Burke-Gilman trail. We would walk through the fall leaves or gray drizzle, carrying piles of umbrellas, ponchos, hats, mittens, and my dad's famous solution to the rain getting your jeans and shoes wet - a long roll of clear plastic to unroll over the whole row of laps, resulting in many admonitions from the adults to sit still already, you're knocking the plastic on the ground. Needless to say this made The Wave a little problematic. During away games that were too far to drive to, we collected at whichever house had the best football-watching tv at the time and watched the game there. Most Christmas vacations there was a bowl game to go to. We all knew the vocabulary, strategy, roster, conference politics, etc and could discuss them fluently. So yeah, a central part of my childhood that involved a lot of bonding and fond memories.

On the other hand, there's the culture of college football. And football in general. And club sports in general. Case in point: Penn State. First, you have a hierarchical structure where careers ride on wins and losses and revenue brought in. For a graduate assistant coach, being a whistle blower is a career-ending move. The very machinery that you are hitching your career wagon to will grind you up in a heartbeat if you buck the system and step outside the clear but implicit code of (mis)conduct. Then there's the reluctance of the administration to do a goddamn thing to prevent serious ethical breaches and abuses as long as the program is doing what the program is supposed to do - win games and make money. After all, involving the police and bringing charges against people is really bad PR. Better to sweep it all under the rug. What's the rape of a few 10 year-olds when $68 million a year is at stake? Collateral damage.

And so I distrust college football, because it's a patriarchal institution driven by a warped set of values, which isolates itself in order to maintain the fucked up culture that results from these values, and somehow manages to maintain its privileged status in spite of repeated instances of misconduct and abuse. And what does this all remind us of? The Catholic church, perhaps?

Right. You could take that sentence and replace "college football" with "the church" and it would perfectly capture the issue. Like this:

I distrust the church,* because it's a patriarchal institution driven by a warped set of values, which isolates itself in order to maintain the fucked up culture that results from these values, and somehow manages to maintain its privileged status in spite of repeated instances of misconduct and abuse.

Note that I say "the church" here instead of "the Catholic church" because I think the abuses rampant in the Catholic church are just the most widespread and visible abuses of their kind. You might remember that the church I grew up in, which was decidedly not Catholic, was a great environment for abuse as well. Obviously the values that drive the institution and allow for the abuses are different, but the same dynamic is at play.

So I think that isolating a couple of scapegoats at Penn State and publicly excoriating them is kind of a joke. Way too little; way too late. Until we take a step back and really examine the culture and practices of the institution, we can expect to see one instance of misconduct after another. Nothing will change. Patriarchal, hierarchical institutions will always choose to sacrifice individuals and engage in self-protective behavior to preserve their own culture and practices, and maintain their privileged status. That's the way it works. That’s what it means to be a patriarchal institution. What did we expect already?

*Of course it's true that not all churches fit this description, and in fact there are some churches that make an effort to prioritize the needs of individuals over that of the institution. But I still think this is the exception rather than the rule. Generally speaking, the institutional nature of a church results in a tendency to pursue practices that are protective of the institution first, even if this comes at a cost to individual members.
6 comments

Three quickies and a Monday song

One
I've always thought it's unfortunate that the culture in which abstinence and purity rhetoric dominates is also one in which sexual dysfunction is covered up or accepted as a fact of life. Of course, this is the culture I grew up in, and I can tell you that talking honestly and openly about sex is strongly discouraged. Any indication of a lack of fulfillment from sex within marriage is viewed as a sign of selfishness, or an "impure heart." I've always thought this was a recipe for disaster. First you make sex taboo, and teach young people to avoid all sexual contact, sexual behavior, and even sexual thoughts (good luck with that) until marriage. Then miraculously these two people who are completely sexually inexperienced, and most likely have some huge psychological walls built up around the very concept of sex, are supposed to magically have awesome, mutually-fulfilling sex on their wedding night, and for the next 50 years. Right. I mean, not only is there the inexperience factor, but there's also all the rhetoric about impurity, where a woman (especially) who has had premarital sex is dirty and less valuable in some way. So if sex makes you dirty before you're married, and you spend 18 years associating sexual contact with pollution and degradation, how do you magically "flip the switch" overnight and go to thinking of it as a positive, fulfilling thing?

The prohibition on discussing sexual dissatisfaction within marriage is a such a central mechanism in the purity and abstinence machinery that it's encouraging to see advice columns like this: The Monotony of Monogamy: I married my first sexual partner, and now I’m itching to cheat, where the more likely trajectory is openly discussed. Not that it will change much, but there it is. 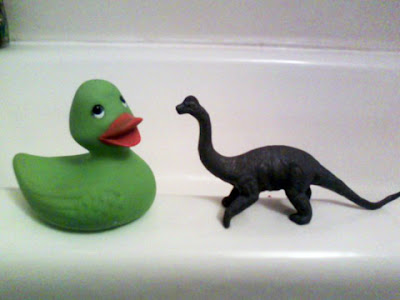 When my daughter got out of the bath the other night, she left these two sitting on the side of the tub. I've been wondering what they were talking about ever since.


Three
In a recent Science article, The Pseudoscience of Single-Sex Schooling, much of the data that has been used to support single-sex schooling is debunked, and some of the truly significant problems surrounding segregated schooling are discussed. It's totally worth a read.


And finally, a Monday song.