Let's not forget who's talking here

Generally speaking I think there's not really much more to be said on the issue of gun violence in the U.S. But I think it is an interesting (and tragic) study in how commerce drives culture in our style of capitalism + democracy.

According to this article, "the NRA has given more than $36 million to the 56 Republican senators who blocked the gun control measures on Monday." Where does that funding come from? The gun industry, of course. When the economic interests of our industries are more powerful than our collective beliefs and values, it's time to reevaluate how we do shit. Of course this has been said a million times before, but there it is. As long as we're willing to allow the industry to shape and dominate the dialogue, we'll continue to get what we've always gotten. In the meantime, Republicans can't claim to be the "pro-life" party as long as they're the minions of the firearms industry. And as a nation, we can't claim to value the lives of the people who are killed in mass shootings until we're willing to do something about it.

I'm sure this is what the founding fathers intended - aren't you? 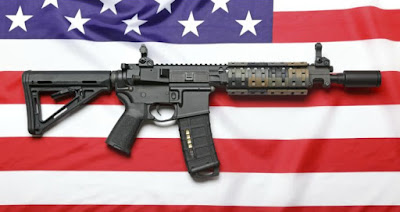 The perils of changing your brand midstream

Now that primary season is effectively over, people are visibly shifting into general election mode. Most prominent Republicans have fallen in line and endorsed Trump, at least to some extent. And now there's some concern about broader appeal and independent voters and all that, and now it behooves the campaign to soften up on the racism and misogyny. Which is of course the strategic thing to do.

Unfortunately it's not a terribly realistic thing to do, from a marketing perspective. It helps to make a distinction here between a brand and a set of talking points. Your talking points can change from day to day. They reflect your current priorities - the things that you take to be important in the short term. In contrast, your brand is who you are - or at least the public perception of who you are.*

Given the timeline of a political campaign, the brand that brought you into the arena is crucial, because there really isn't sufficient time to change your brand in significant ways in a general election. This could be seen as a flaw in the primary system - the things that bring success in the primaries may not be the same things that bring success in the general election.

Either way, the pertinent question at this point is how will Trump go about changing his brand? It's clear that other Republicans want him to, as they recoil from his attacks on Gonzalo Curiel. But the racist and misogynist stances that Trump has always taken are not talking points for him. They're central to his brand. And this is not something you can change overnight. It's also not clear that he wants to change his brand. And in fact, changing brands midstream can be a very tricky and potentially disastrous thing. Can you work to place more emphasis on different aspects of your brand? Sure. But changing it wholesale on this kind of timeline is highly unlikely.

So the only question is, how many voters outside of Trump's base can be persuaded to swallow the unsavory aspects of his brand in order to attain the benefits they think they'll get from his presidency? It will be interesting to find out...

*The distinction between who you are and how your brand is perceived is an endlessly interesting and important one, particularly in the context of conversations on business ethics and marketing strategies.
3 comments