I've had this on-going debate with a couple of adult acquaintances who are die-hard SpongeBob fans. My feeling is that shows like SpongeBob that move at a frenetic pace are not good for language development, to put it mildly. (Not to mention the countless little violent interactions between characters that provide much of the humor in most fast-paced cartoons...) I also think that being constantly exposed to frenetic TV shows inhibits the development of an attention span, which is the most fundamental requirement for learning how to read. So I can't help but gloat a tiny bit when I come across studies like this: The Immediate Impact of Different Types of Television on Young Children's Executive Function, the results of which are summed up nicely here:


Simply put, television is both good and bad: there are good programs and bad ones. And, what makes programs good or bad has to do not only with the content itself but with what in communications research are known as the formal features of that content. Some sequences are naturally paced (eg, human-Muppet interactions on Sesame Street), and some are rapid (eg, SpongeBob SquarePants). Others occur in what seems like slow motion (eg, Mr Roger's Neighborhood). In addition to the pace of the show, formal features include the edits and cuts. Some shows change scenes more than 3 times per minute, whereas others have greater continuity. The “overstimulation hypothesis” is based on the theory that the surreal pacing and sequencing of some shows might tax the brain or parts of it, leading to short-term (or long-term) deficits. (from The Effects of Fast-Paced Cartoons)

I completely agree with the approach advocated in this article: How Can We Stop Pedophiles? It just doesn't seem that controversial to me. Of course, I also have zero confidence in our collective ability to ever get to a place where we have a sensible and humane approach to sexual predators, but that's a separate issue...

Maybe this is just on my mind because of the choices I've made recently regarding preschool, but there seems to be a lot of recent research and writing that basically explains why a Montessori approach works so well in so many ways in which our traditional educational models fail. One great example is Drive : the surprising truth about what motivates us by Daniel Pink. You should read it. It's not just about early childhood education, but it's an easy, compelling read that is extremely relevant to our educational choices. I highly recommend it.
3 comments

Halloween Costumes for the Ladies

Ever wondered what you would get if you plugged the names of women's Halloween costumes from the top three costume sites (according to Google) into a word cloud generator? Well, wonder no more: 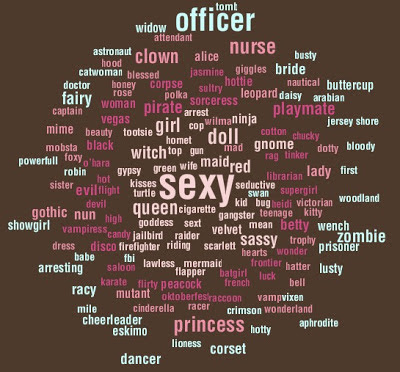 And the men's costumes at the same websites? 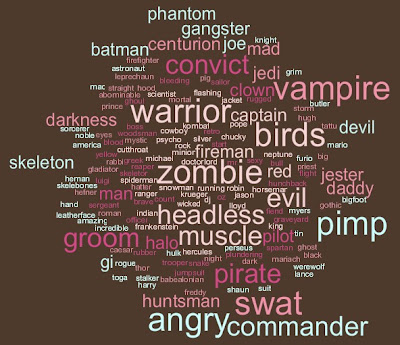 I took my girls to see this train when it came through town today. I thought it would be sorta cool. It was actually kind of awesome. Who woulda thought? 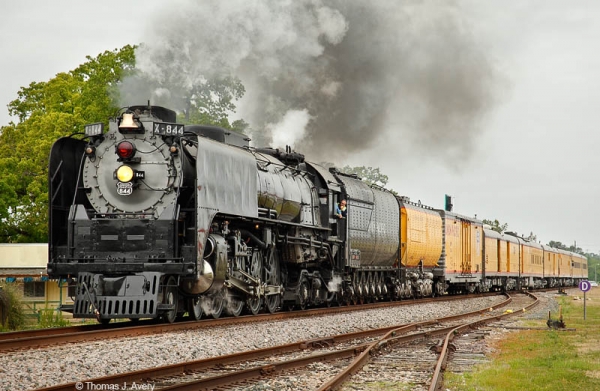 The rhetoric of inclusiveness

But here's a quick sketch of something I've been ponderin' on lately.

For a while now I've had this vague, unarticulated sense of discomfort with the rhetoric of inclusiveness and sharing that's so common in daycares, preschools, and the K-6 setting. As you probably know, usually I'm all about inclusiveness and non-violent communication and all that. But I think there's a pretty serious misapplication of these otherwise good ideas in this context. It seems to me that there's a very important piece getting lost in the dialogue, and it's a piece that's especially important for girls.

Establishing and maintaining healthy boundaries in your relationships is an important part of being a healthy, functional adult. Having a sense of your own worth, and your right to defend yourself against abuse or a situation that makes you feel uncomfortable is critical. And establishing a sense of autonomy and ownership of self is foundational to both of these. My thought is that with the excessive emphasis on inclusion and sharing and avoiding conflict as much as possible that's so common to early educational environments, this important foundation gets lost.

The insistence on referring to every child in the class or group as "your friends" even when there's a legitimate conflict going on is one example of this dynamic. In an adult context, we interact with people every day whom we would not choose as our friends. We can be polite and kind to them without making them a friend. In fact, if that person is rude or abusive to us, it would be ridiculous to think of them as "my friend" simply because we find ourselves in the same place with them on a regular basis. And yet this seems to be what we're expecting of children. You'll often see adults expecting kids to share a toy they just began playing with, or to include other children in a game they're playing even if it's not a good time in the game to add more players. And then there's the old expectation that children will reciprocate with physical affection to another child or an adult who's demanding it, even if the child is feeling shy, or is not in the mood for the physical interaction.

So we teach them that they can't say no; they can't pursue their own projects uninterrupted when another child decides they want to participate or use the toy in question; they can't politely and respectfully decline to be friends with someone whose company they don't enjoy... And then we wonder why they have such a hard time establishing healthy boundaries in their relationships as teens and young adults.

So what I'm thinking is this: Inclusiveness and non-violent communication are perfectly consistent with establishing and maintaining healthy personal boundaries. But somewhere along the line, someone got the idea that being kind and inclusive requires a person to become a doormat who cannot defend themselves or politely excuse themselves from interactions that make them feel uncomfortable. And the fact that this has become such a dominant paradigm in classroom environments is unfortunate and counterproductive, to say the least. I think we often learn more about relationships from negative interactions, but only when a healthy way of handling conflict is encouraged and modelled for us.

It seems to me that empowering kids to value themselves and see themselves as autonomous beings who deserve to stand up for themselves and be heard is as important as teaching them to be inclusive and considerate. In fact, it seems to be the mirror image and counterbalance. Instead of  "I'm OK, you're OK," it's "you're valuable, and so am I."