I'm way-the-hell out of touch these days, being too busy, tired, and apathetic to keep tabs on any kind of news besides the 20 minutes of whatever's on NPR every morning. So apparently I totally missed out on some strange comment Mike Huckabee made about how I (since I'm an American lady) want these dudes to pay for my birth control since I can't be expected to control my libido. Curiouser and curiouser...

I'm baffled about what they have to do with my birth control or my libido, but I kinda like their music.

I'm militantly agnostic, but thanks for asking

Recently a student in one of my classes asked me if I was an atheist. I usually try to avoid answering questions like this, but he was pretty persistent, so I said I don't really feel like I own any of those titles (Christian, atheist, etc.). After all, what does it mean to claim one of these titles for yourself? Is being a Christian or a Buddhist or an atheist the same for me as it is for you? Is it something you can put on and take off like an item of clothing, or does it have to be deeply embedded in your psyche and your worldview to be true of you?

But I have a tendency to make everything overly complicated, I'm told, so in this case I picked one: I guess I'm agnostic, if I have to be something. My student replied with this "to be agnostic is just to lack the balls to admit that there is no god. Agnostics are atheists without balls." I didn't laugh at this, although I wanted to. This kid is very sincere and invested and has fire in his belly, and you shouldn't laugh when someone says something, however misguided, from that place. Also, I'm sure he was quoting someone that he admires. So I said "whatever your views are on having balls and on being  atheist versus agnostic, I think if you're viewing this from the perspective of proof and rational bases for our beliefs, there's a problem with that statement, but I'd be willing to discuss it more with you outside of class" because we had other material to cover, and because these kinds of conversations just make me tired on most days, and because I wasn't really in the mood to have the discussion about the appropriateness of the "having balls" analogy.

The thing is, it seems like a strange thing to me to make a claim in either direction ("I affirm that there is a god," "I affirm that there is no god," "I affirm that there are many gods") when you have no basis for this kind of statement. Don't get me wrong; I think it's fine to say "I feel like there is no god," or "I feel like there is a loving God who watches over us, etc."  But to make assertions about the existence of something for which you cannot possibly have proof seems irrational and foolhardy to me. And what possible difference could it make in my day-to-day life? The existence of a being (which I admit seems highly highly improbable to me) with whom I have no interaction just seems sort of ... irrelevant to me. Tangential to my daily experience, maybe. I mean, I'm also open to the possibility that some day we might discover that unicorns do exist in some remote corner of the universe. Which will impact my life how, exactly? 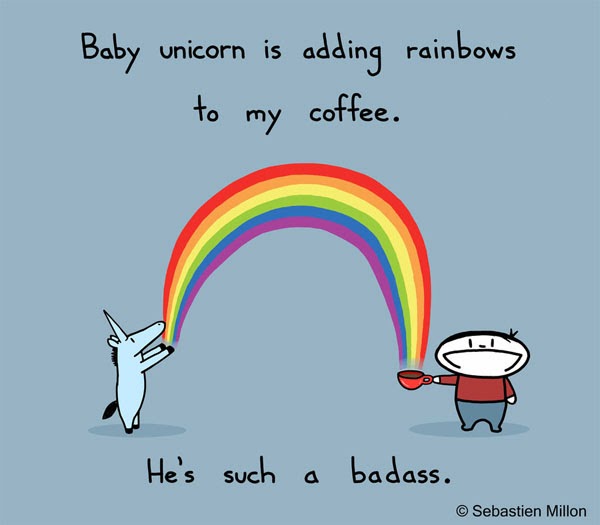 But... I have atheist friends who argue that it's neither irrelevant nor tangential to your daily life, because whether or not you believe in the existence of a deity determines your view of yourself and others, and dictates how you live your life (isn't it interesting that my fundamentalist evangelical family would argue the exact same thing?). Further, one of these friends (a habitual mansplainer, coincidentally) tells me that to refuse to take a stance one way or another is immature. I usually just laugh this off, but this student's question got me thinking about it.

It seems to me that needing to have a set belief about some supernatural beings in order to know who we are and how we ought to treat each other is maybe less mature than thinking that the existence of supernatural beings is probably irrelevant to these questions. And doesn't it seem a tad bit narcissistic to assume that if there is/are/were supernatural beings, that they would be interested in how we live our lives and in whether or not we believe in their existence? If you're omnipotent, or just even really really big and powerful and remote, why exactly would you give a flying fuck about what a bunch of tiny, flawed, finite being were running around doing on some little speck of a dying planet? This I do not understand, and I know the Bible intimately, as well as the ins and outs of various theological positions and histories, having grown up in a church that firmly believes in textual submersion and endless discussion of contrasting interpretations and theological stances.* But what does any of it have to do with me? This is the question that remains to be answered.

And when it comes to whether or not agnostics have balls, well, #1 I'm totally OK with not having balls (whatever that might have to do with this discussion) and #2 I think in many situations it takes more courage to admit you don't or can't know something than to get all blustery about some assertion that you can't possibly have enough evidence to reliably defend. I think we generally tend to believe that Socrates had balls, and he was endlessly on about admitting to the things we don't know, right?

So... the question is, which is more mature? Are my religious and atheist acquaintances equally right in their insistence that one must take a stance, and that this is what maturity demands? Or am I right that it's equally (or maybe more) mature to reach a point in your life where you believe you should be the person who your values and convictions lead you to be regardless of your beliefs about the existence of supernatural beings?

Also, have a good weekend everyone. I hope baby unicorn adds rainbows to your coffee too.