The Social Construction of Gender

I've been involved in a number of conversations lately about the social construction of gender, and it occurs to me that what it means for gender to be a social construct, along with the implications of a social construction theory of gender, is not clear to a lot of people. So here's an explanation that may clarify things a bit.
A social construction is something that doesn't exist independently in the "natural" world, but is instead an invention of society. Cultural practices and norms give rise to the existence of social constructs and govern the practices, customs, and rules concerning the way we use/view/understand them. In other words, we all act as if they exist, and because of our intersubjective agreement, they do.
The classic example of a social construct is money. Various cultures utilize

paper, gold, silver, or other items as a medium for trade. To do this, we invest the object with value that we all acknowledge (we act as if it has value), and this informs our practices when it comes to money. But money is not a thing that occurs independently of human activity in the natural world. Thus it is a social construction. It's very real - calling it a social construct does not amount to calling it imaginary or non-existent. But its existence is dependent on our culture and our practices. This means that its definition, use, meaning, value, etc. is entirely contingent on culture.
As our culture changes, so do our constructs. Some constructs come into being and then fall into disuse and thus go out of existence. Others remain but change from one culture and historical period to another. Gender is one such construct. The traits and behaviors that are thought to be "masculine" and "feminine" differ dramatically from one culture and time period to 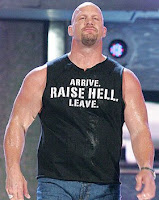 another. Appropriate ways of behaving, the labor that's assigned to gender groups, beliefs about natural abilities and propensities, etc. change significantly. And this variation and adaptation to conditions and social pressures reinforces the idea that gender is a social construction rather than some sort of essence that arises from biology. Because if gender was determined by physical sex, then it wouldn't vary in this way, but would remain constant, just as other biologically determined attributes remain constant. Instead, gender varies with cultural change.
Generally speaking, gender is assigned at birth according to physical sex. Medical professionals look at the baby's genitals and announce that the baby is a boy or a girl 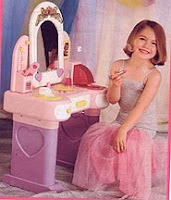 (unless the child is intersex, in which case much work is done to force the child into one camp or the other). And then the work begins to socialize the child and teach them the script that goes with the gender they've been assigned. And most of us get to be pretty darn good at acting out the appropriate script. We learn which emotions we're supposed to display, which activities we're supposed to enjoy and excel at, and which ones we're supposed to avoid or suck at, how to talk to each other, how to manage our body language, which kind of work and hobbies we're supposed to pursue, etc. And for many of us it's not a great fit, but we manage, or we learn how to make those features of ourselves that don't fit the script less conspicuous (i.e., we pass). But for some of us, it feels wrong enough that we can't just fit in or pass. For transgender and genderqueer individuals, performing the other script, or a different script altogether, is the only way to make life livable. (For transsexuals, the issue encompasses more than gender, so they will have other issues, except insofar as they often also learn to perform "the other" gender script.)
So this description raises a number of questions. Why are there only two scripts, when bodies seem to come in more than two shapes? Why do we need these scripts at all? Why are we so committed to the idea that there must be a one-to-one correspondence between the two scripts we have and the two kinds of bodies we insist on believing people are born into? These are all good questions, and all things that feminists should be pushing on and tugging at the loose strings. A few brief answers:
We need the scripts and the clearly delineated categorical distinctions, because you can't build hierarchy without difference. Hierarchy depends on difference, so you choose some physical differences, like genitalia and skin color, and invest them with significance. Once you have groups which are thought to be essentially different, you can build up and justify your hierarchy on the basis of them. Making them essential, or biologically grounded, gives them immutability and God-ordainedness.
So then we need to maintain the one-to-one correspondence in order to maintain the stability 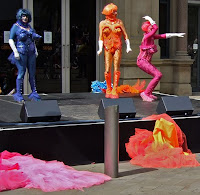 and essential nature of the distinctions. We can't allow people to go around determining their own identity and position in the hierarchy will-nilly, or everything will fall apart. And we especially must maintain the gender-sex link because of heteronormativity. After all, one function of gender is to indicate to the world what kind of bidness you've got going on under your clothes. As an outward marker of physical sex, gender allows us to identify which individuals are potential mates for us, and avoid the oh-so-horrifying experience of being attracted to someone with (gasp!) the wrong set of genitalia.
So what follows from the view of gender as a social construction? First, it reveals that gender is

not immutable or set in stone. Harmful aspects of our construction of gender can and should be discarded. But beyond that, if gender exists to support hierarchy, then gender, as it is viewed and practiced in our culture, is not only uncomfortable for many people, but a tool of oppression. So at the very least, driving a wedge between sex and gender, and putting pressure on the notion that everyone has to fit into some kind of neat binary or follow some kind of carefully delineated script, benefits everyone and serves to weaken patriarchal structures. And allowing every individual to navigate their own identity formation and locate their own spot on the gender continuum would lead to a lot less disonnance and uncomfortable performances, not to mention physical danger and stigma for those who don't adhere to the script to which they were assigned.
However, one thing that the social construction view of gender does not get you is a condemnation of trans people for "reifying gender." First, this view (espoused by some very

vocal radical feminists, to the horror and dismay of other radical feminists) is based on a profound misunderstanding of social constructionism and reification. Second, the view is inconsistent in that it condemns one group (trans folk) for performing gender, but ignores the fact that all of us are performing gender all the time. If trans people reify gender by adhering to a script, then so do cis people. And even if this view was coherent, it shows a profound lack of compassion and understanding of the individuals. We are all of us born into a system that is already gendered, and our social survival depends on our learning how to perform the script. This is not an individual decision that's ours to make. So this is an instance where we ought to hate the game, but not the player.
And one thing's for sure: we all benefit by discourses and practices which drive a wedge between sex and gender. The loosening of these strict categories and binaries can result in a view of sex and gender which is far more fluid and flexible, allowing more breathing room for everyone.