The white male privilege of Bernie or Bust

Some disclaimers:
After numerous conversations the past few days I'm thoroughly frustrated with the whole thing. First, let's be reasonable. You don't get to say #nevertrump and also #neverhillary. That's not how it works. In this case, #neverhillary just is Trump. And you can rail against the system (and I'll agree) and throw a giant tantrum (preferably not in my ear, but I've tolerated it before and can probably handle it again), but at the end of the day you still can't have it both ways. Depending on the state you live in, a #neverhillary vote amounts to a vote for Trump.

So maybe you're OK with that. Maybe you think we deserve a Trump presidency, or you want to kick-start the revolution, or you just want revenge on the DNC. The problem is, that's revenge on all of us. And it's disproportionate revenge on women, minorities, LGBTQI folks, and the working poor. A Trump presidency combined with a Republican Congress combined with a Trump supreme court justice spells the end of access to comprehensive reproductive care, for example. Maybe they can't make it illegal, but they can make it inaccessible, and that amounts to the same thing. A Trump presidency amounts to unequal pay (because, after all, women would get the same pay if they did as good of a job as men). A Trump presidency amounts to All Lives Matter. I could keep going here, but you get my point.

The privilege to not care where the chips fall is every bit as powerful as the economic and social privileges that come with being white and male. As a woman, I cannot afford to be Bernie or Bust. And as supporters of Bernie, all the B or B-ers should ask themselves "what would Bernie do?"

I think Bernie would stand with me.

I'm guessing we all know by now that a speech writer on the Trump campaign staff issued an apology for plagiarizing Michelle Obama's speech. What's interesting is the wording she chose.

"I apologize for the confusion and hysteria my mistake has caused."

Confusion is just funny, because it doesn't seem to me that anyone was confused. It was glaringly obvious. But hysteria - that's an interesting word choice. There's a history behind that word - a history that even now makes it a convenient tool for dismissing the legitimate concerns and feelings that other people might have. It suggests that the problem is with the person on the receiving end of the wrongdoing rather than with the wrongdoer. It almost goes as far as suggesting that you're only responding the way you are because ... there's blood coming out of you.

Hysteria vs. Concern
I would suggest that there are two underlying reasons many people feel uncomfortable with Melania Trump's speech. The first is that plagiarism is something we should take seriously, always and everywhere. Respect for the intellectual property of others is a basic democratic value. The second concern is that maybe the plagiarized speech is indicative of a deeper issue - an approach to the world and to other people in it that's shared by the Trump camp. Blatant disregard for others in small things is usually an indicator of blatant disregard for others in big ways.

The Trump camp hopes to paint this as an oops. Many people are interpreting it as an expression of character. That's harder to fix. 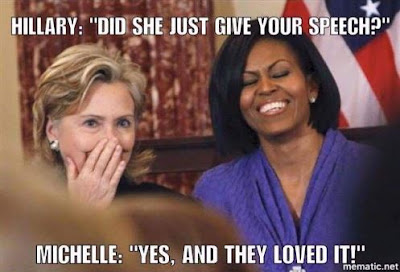 I was at a casual gathering recently and found myself sitting around a fire pit with a group of friendly acquaintances. The mood was light and open, the conversation witty and engaging, and the night very pleasant. At one point one of the other people there turned the conversation to church and started advocating that the rest of us visit his church. I kept my mouth shut, waiting for the conversation to move on. It didn't. He finally asked me directly if I would be interested in attending his church, and I commented in an offhand way that church isn't really my thing and then tried to change the subject. It didn't work. I kept politely trying to dodge, and he kept pursuing the subject. I should have gotten up and left, but I didn't. Instead it got to the point where he directly asked what it is I don't like about church. I responded that I find evangelical churches to be emotionally manipulative in general, that I feel that at this point in my life I have a strong sense of what I think and feel about God, and that church has not been a positive experience for me. He pushed on this last point. Why wasn't it positive? What went wrong? I said I don't respond well to situations in which I feel that I'm being judged on criteria and values that I don't espouse for myself, and that appeals to emotion and fear turn me off. I also noted that the "support" one gets from a church community seems rather conditional, and I feel more comfortable forging my own support networks. He kept pushing on this last point and asking for examples, Finally I responded with several examples of how the church of my childhood as well as his own church in the town where I live now had not been supportive of individuals who were dealing with personal struggles, but shaming and manipulative. He wasn't going to let it drop, so I finally said "and then there's the fact that my own grandfather and uncle molested me, and everyone was more concerned with protecting the reputation of the church than with my well-being. That doesn't seem loving or supportive." This brought the conversation to a full stop, and made several individuals in the situation visibly uncomfortable. I had obviously crossed a line by mentioning my sexual abuse. But why? Why is this topic off limits?

My mom has cited a concern for my embarrassment or shame when defending the way the adults in the family handled the situation when it all came out in the open. Their actions that looked like they were defending the perpetrators were really intended to protect the victims. But again, why? What do I have to be ashamed about? I did nothing that should invoke shame. In my mind, the shame lies entirely on the shoulders of my uncle and grandpa.* And yet there's this taboo surrounding any discussion of sexual abuse. One ought not to talk about it. Even though it informs so much about who we are, for better or for worse. It's a formative experience. And it seems to me that by having this taboo - by requiring survivors of sexual abuse to keep a lid on it - we impose a second burden. You have to figure out how to grow and mature through the damage that was done, to develop healthy coping skills and learn how to let yourself be vulnerable and take social risks in healthy ways. And you also have to carry the weight of this secret. You must protect the delicate sensibilities of others by never speaking of it except with your closest friends. This seems somewhat akin to a second victimization. I didn't ask for the abuse, and I also didn't ask for the weight of this secret. This secret that explains so much about me. And yet it's mine.

The phrase "gag order" has always seemed unnecessarily violent to me. It's kind of jarring. But now I see how appropriate the violence it evokes really is. He who controls the discourse wields the power, right?

I choose to speak about it when speaking seems appropriate. Try to stop me.


*Unless, of course you're of the opinion that a woman is damaged goods, and polluted in some sense, once she has been sexual in any way - even if she did not consent or was too young to even understand what was happening. Then, of course, she does have cause for shame. The source of her personal value has been compromised.