The thing about homemade granola is that you can come up with an infinite number of combinations, and as long as your ratio of wet to dry ingredients is right, you can't go wrong. My kid needs a lot of protein in an easy, portable form, so we go through a lot of granola at my house. Here's the recipe we've been using the most lately (it's all very approximate - there's not a lot of measuring going on here):

Mix these together in a bowl:
3 cups of rolled oats or any combination of oats, barley flakes, quinoa flakes, buckwheat flakes, etc.
⅓ cup pumpkin seeds
⅓ cup sunflower seeds (or any kind of nuts you want)
A generous sprinkle of sea salt
½ tsp cinnamon
¼ tsp nutmeg
A dash of cloves (or just use pumpkin pie spice for all the spices)
Mix these together in a glass measuring cup:
¼ cup melted coconut oil
½ cup maple syrup
1½ tsp vanilla

Pour the wet ingredients over the dry and mix well. Spread on a cookie sheet and bake at 300° for about 25 minutes.

You can also mix in a handful or two of dried fruit right when you take it out of the oven. We usually add currants or dried cherries. 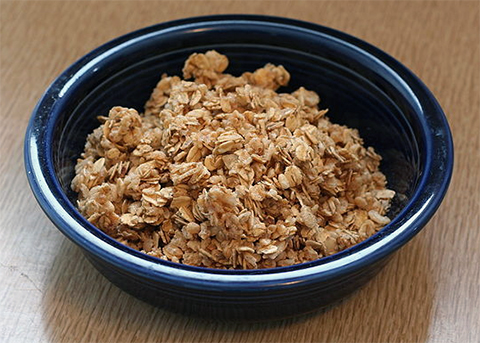 As a wife and mother

So there's this from Conan O'Brien:

And Jenna Lee's response here, in which she admonishes O'Brien on the grounds that she's a wife and a new mother. And a daughter too.

Many news outlets are pointing to the irony of her response, given that it's a standard practice at Fox News to feature female anchors in short skirts with heavy makeup, etc. And apparently there's a leg cam!!

But I think the interesting thing is how she frames her response: "as a wife, and a new mom, this trashy comment is not only inappropriate, it's clearly ridiculous. And not even funny! I'm also someone's daughter..."  Because if you weren't a wife and mother and someone's daughter it would be OK to say inappropriate things about you? Because a woman's worth is entirely derivative of the social relations that legitimize her existence?

It's a very telling response, isn't it?
8 comments

The thing about the Duggars

So, I've been thinking about the Duggars off and on lately. A lot has already been said about the apparent hypocrisy in the way they've handled the molestation situation they faced (and now the Ashley Madison situation), as well as the way sexual abuse is handled in their social context in general.

I think all of these conversations point to some profound and disturbing problems in that subculture, but I'm not sure that all of the conversations are productive in that there's a lack of understanding of the worldview and motivations of the individuals in the situation. And without that understanding, the behavior of the adults involved is downright mind-boggling. Although I didn't grow up in a quiverfull situation, my church was very similar on many points of doctrine, especially where the role of women and family dynamics are concerned. So here are some thoughts from a former insider perspective. A sort of retroactive ethnography, so to speak.

The view of children
The confusing thing about the rhetoric surrounding children in this culture is that conservative Christians take themselves to be the only ones with true family values. Children are precious gifts from God etc. etc. So when an abuse situation in the church comes to light (either sexual abuse or those surrounding disciplinary abuse) it's hard to understand how the individuals involved can't see the hypocrisy in their claims. But this is because in their worldview these things are not contradictory.

Here's one way to think of it. A common (in our culture) view of parenting involves parameters for success such as a child who is confident, well-adjusted, thoughtful, creative, independent and who wants to have a relationship with the parent on her own footing. In this view, to value a child is to see her for who she really is, and interact with her accordingly. In this worldview, you could not adhere to abusive disciplinary actions in order to "break the will" of the child or minimize the impact of sexual abuse* and still see yourself as a loving parent. Contrast that with the conservative Christian worldview where children are tools in fighting the "good" fight (arrows in your quiver), and reflections to the world of the parents' faith and parenting ability, and little creatures to be controlled and directed into unquestioning conformity. In some conservative religious circles it's an accepted fact that a child would be better off dead than to be corrupted by a sinful world. Of course this sounds very black and white and in most cases you won't find these extremes. But generally speaking, that is the fundamental difference.

Notice that in the conservative view there is very little thought to the inner life of the child. What do I care about what you're thinking or feeling as long as you are conforming to my rules? Why would I try to see you for who you are and value you as an individual when at the end of the day we were all made in God's image and our job is to obey?

Of course, there is very little room in this view for the long-term impact on the victim of sexual abuse. On the flip side, there's no effective framework for dealing with the abuser either. In most cases the abuser is told "pray for forgiveness and stop doing that" as if it's a light switch he can flip off. The victim is told that she's being selfish and unforgiving because she's still dwelling on something that happened in the past. In this context it's impossible to discuss how the events in our pasts inflict emotional damage and change the trajectory of our development. Because at the end of the day, obedience is all that matters and power takes priority over relationships.**

Advancing the cause of the church
Add to this complexity the concern for the church. In the conservative Christian mindset the church is a lonely island in a sea of depravity, and it's at war on all sides with sin and secularism. Much is made of the scripture warning Christians that they will be persecuted. In this environment, acknowledging abuse or seeking outside assistance in handling it is an admission of a flaw in the church. The church must have a perfect image or it will harm the cause of Christ. Serving Christ is the highest calling of a Christian - even higher than the obligation to protect one's children. When the interests of the child and the interests of the church are pitted against each other, it's highly unlikely that the child will win. In cases where the parent refuses to prioritize the church, the family often ends up leaving the church. For families that live such an insular life (which is encouraged), this can be terribly devastating as well, since the church is your entire community.

Mutual Confusion
So many things about the Duggar situation, and all of the recent news stories about sexual abuse in conservative Christian environments, is completely baffling to people on the outside of the conservative culture. It's just so hard to make sense of the conflicting narratives. But there's no doubt in my mind that it's totally baffling to those on the inside as well. When I see Jim Bob and Michelle Duggar discussing the way they handled the situation, I'm sure that they truly believe the seemingly contradictory statements they affirm. And I'm sure that our view of the situation is completely and totally baffling to them. Why would they have put Josh into treatment and gotten therapy for the girls? What would that have accomplished? That approach, which seems so reasonable and obvious to us, just doesn't make sense when you're looking at the world through their eyes.

No change in sight
At the end of the day, the conversations that seem to be going on are barely scratching the surface. We're simply not speaking the same language, and trying to understand their actions from an outsider perspective is futile. Pointing out the damage that has been done to individuals in their families proves nothing to them, since they'll either dismiss it or find other ad-hoc explanations (pornography, the devil made him do it, it was God's will somehow...) to counter every claim. And in fact, damage to individuals is not a reason to change your practices if they're serving some bigger cause in the long run.

So there it is. No change to be made. No judging them on our terms (although they judge us on their terms). Just an attempt to understand what's going on.

*or squash the natural sexual curiosity of a child until it evolves into deviance, if that is what happened with Josh Duggar
**I'm using "he" for abuser and "she" for the victim here for the sake of convenience, but also because this pattern does reflect the power structure of conservative Christian culture. A female child is in the lowest position on the totem pole, and the least likely to feel that she can speak up for herself.
8 comments