Someecards does it again 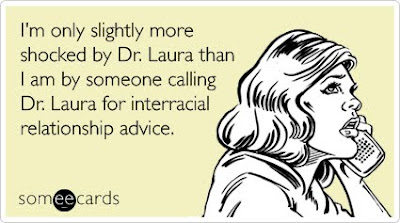 Just so...exactly. In fact, I admit to not even knowing Dr Laura was still on the air, and thus being both surprised by that fact and by the fact that someone would call her with a problem involving race or gender. Wow. I need to start paying attention.

I have a lot of stuff to post about. But right now I'm really busy and emotionally absorbed elsewhere and not in the mood to post. But just to keep you from giving up on me altogether, here are some of the things cookin' in my head: In the meantime, ponder the Halloween baby/toddler t-shirts offered by a certain large retailer this year. Note how the female-gendered ones involve manipulative social relations ("Mommy's wrapped around my finger" and "Daddy's under my spell") while the male-gendered ones feature space explorers and monsters and demands for candy. Business as usual...

Mormons: we're just like you (except for how we hate The Gay)

So, I've been hearing about these new ads the Mormon church is running. The idea is to profile "normal" looking people and then right at the end say "oh, and I'm Mormon." Apparently the church thought this was necessary because many Americans have a low opinion of the church. Mormon leadership chalks this up to the prevalence of TV programming and news coverage that focuses on polygamist sects.

The thing is, I think most Americans get that the polygamist groups are now officially not recognized by the church. But that's totally beside the point. First, the modern-day polygamist sects are a reminder that back in the day when they could get away with it, they were all polygamists. Women were taught to put up with it and shut the fuck up if they wished to enjoy eternal bliss in the afterlife. It was only when pressure from the larger culture and the government became too strong that the church received a new "inspiration from God" saying that polygamy wasn't cool anymore. And the same is true with the role of Blacks in the church.

In fact, the Mormon church provides a great object lesson in privilege. It was all white males who founded and led the church, so of course all their teachings and practices benefited white males. Over the years they've been forced to make concessions to various non-male non-white groups, but you don't get a cookie for doing the right thing only after you've been forced to do it. So no matter how hard the church tries to distance themselves from these groups, the polygamist sects serve as a living reminder of church history.

And of course, the other thing that leaves so many Americans with a low opinion of the Mormon church is their role in buying ultra-conservative and anti-gay election results. Hatefulness backed by the economic resources to enable you to force your beliefs on everyone else is a lethal combination. And it tends to make people despise you, not respect you. So all of this makes me laugh a cynical, bitter laugh when I see these ads. If they really wanted to be honest they should say "My name is _________ and I'm a normal person just like you, only I'm Mormon so I hate The Gay and want to force everyone to live my lifestyle." At least it would be honest.
14 comments 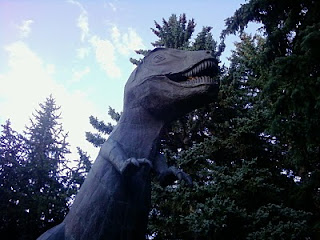 This message was sent using the Picture and Video Messaging service from Verizon Wireless!

To learn how you can snap pictures and capture videos with your wireless phone visit www.verizonwireless.com/picture.

Note: To play video messages sent to email, QuickTime� 6.5 or higher is required.

It's World Breastfeeding Week, y'all. While I suspect you already know what I have to say about breastfeeding and I'm busy and not

really in the mood to write another post about it, I think it's such a huge feminist issue in our culture that I can't let it pass unremarked. So here you will find a list of previous posts I've written on the topics of breastfeeding and birth and informed choices. These are complicated topics, and much lip-service is given to "choice." But I think we have to move past the lip-service and oversimplification. So here we go:

Have you stumbled across a great post on World Breastfeeding Week? Post it in the comments!
9 comments

Apparently many mortgage companies are turning pregnant women down for mortgages because they equate maternity leave with unemployment. Even if their maternity leave is really short. I wonder if they're doing the same with men who take a couple weeks of sick leave? For some reason I doubt it.

It has now become clear that massive amounts of chemical dispersants were used on the oil spill (out of sight, out of mind, y'all) in spite of the EPA's request to limit the use of them. In order to pretend to take the EPA's concerns into account, there was a paperwork system in place by which BP would have to request permission to use the dispersants from the Coast Guard. The thing is, no matter how much they were proposing to spray, the Coast Guard never denied the requests, so the paperwork was just a deceptive formality. And gallons and gallons of chemical dispersants are in the water as we speak, doing damage that we won't be able to fully understand for years to come. It's a science experiment, y'all. Because we don't do R&D on this kind of stuff in between disasters, reserving the R&D funds instead for improving our drilling and extraction techniques.

Oh yeah, and concerning the claim that the dispersants (Corexit and its siblings) are as mild as dish soap... would you squirt large quantities of Dawn into the aquarium containing your expensive and beloved pet fish? I didn't think so.

And finally, the ACLU is rightfully protesting the fact that Boy Scout troops often use school facilities at a discounted rate given the fact that their discriminatory policies conflict with public policy. A recent court ruling involving a christian student group that had been denied official recognition by the law school it was affiliated with because of its discriminatory policies seems to have implications concerning the relationship between public schools and groups like the Boy Scouts. The court ruled that "it's within the legal parameters of the school to deny official recognition to organizations that don't follow school policies." If discounted access to school facilities counts as official recognition, then this seems pretty clear cut.


What have I missed?
3 comments