I'm still thinking about passing, and it seems to me like we're taught to pass in many, many ways. Many of these have to do with performing gender (whether we're cis, trans, or genderqueer) and some don't.

A co-worker of mine just announced in a somewhat apologetic tone that she's PMSing, after 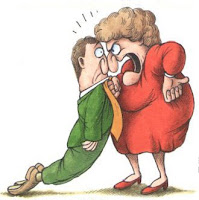 spending several stressful hours dealing with a student who's aggressive, disrespectful, and has a massive sense of entitlement. Attributing her stress and irritation to hormones is an example of one way women are taught to pass in our culture: it's unwomanly to be angry or irritated, even when provoked to the extent that she has been. I can't imagine a male coworker attributing his emotional response to a situation like this to hormones. Why would he? The hormones didn't cause the response - the entitled asshole did.
A student who recently won a mathematics award on campus semi-apologetically explained to us that her father and grandfather are engineers - as if she needs to somehow justify and legitimate her talent. I can't imagine a male student acting so self-deprecating and apologetic after winning an award like this. Why would he? Everyone (including himself) would view it as natural that he won.
My partner frequently has to defend his commitment to our kids to people who act kind of puzzled over why a father would feel such a strong need to spend time with his kids and be truly involved in their lives. I would never have to defend my commitment to them or explain why I feel compelled to spend so much time with them. Because for me it's supposed to be "natural."
But I'm not sure if this one has to do with gender or not. In several recent conversations with friends, I've remembered/ mentioned my experiences as a kid who had a strange gift when it 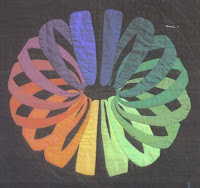 comes to math. I'm one of those people who perceives many things that are ostensibly not math-related in terms of mathematical expressions. Almost everything can be expressed as a mathematical function in my head. Colors have numbers to me. I can perform fairly complex mathematical functions very quickly in my head. I've always been this way, and it seems normal to me. But I rarely ever talk about it. My friends often ask me how much to leave for a tip, if some random number we come across is prime, for mnemonic devices for remembering phone numbers and SSN numbers, etc. But I don't usually describe to them what number a certain color is, or how you would explain a particular social dynamic as a mathematical function. I'm not embarrassed by this feature of my cognition, and I'm not super proud of it. It's just sort of normal.
But the reason I don't talk about it much goes back to second grade. When I was in second grade I told my teacher that colors had numbers. He looked at me without a spark of interest or understanding on his face and said "no they don't." I got the message. In fourth grade we had a

color-by-number math activity in which you calculated the fraction problem in each sector of the picture and then colored it in according to the number-color combos listed in the key. I told my teacher that these were the wrong colors for the numbers. She asked me to explain what I meant. I answered that, for one thing, the number that went with green was too warm, and red should be a prime number. (It's really hard to explain this stuff). She looked at me with a perplexed look for a long minute and then turned to admonish a couple of other kids to return to their seats. I didn't pursue the conversation any further. I could see where it was going.
So I didn't talk about this way I had of perceiving things, but I did learn how to negotiate the world without weirding people out about it. I learned that, even though it's tedious and mind- 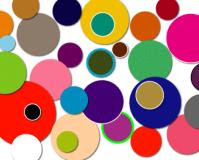 numbing, you have to write out all the steps on a math problem that you already did in your head when you first saw it on the paper. When they ask you to do long division, they mean it. And if you don't show your work, you not only won't get credit for the assignment, but you'll probably be accused of cheating. How else could a skinny little blond kid who doesn't fit our cultural ideal for what a mathematically gifted person looks like correctly calculate 30 long division problems in about 5 minutes without showing any work? She must be cheating. So I think many kids like this learn to stay in their seats and pretend to be working until their classmates are done with the worksheet or test. They learn to laboriously write out each step of the problem, even though that requires them to keep cycling back over it in their minds to remember what all the steps actually were. And they learn how to be invisible. They learn how to pass.
The fact that we often require people with unusual abilities like this to pass makes me wonder

how often it happens that outliers are simply trained to hide their abilities and blend in. Just as we want everyone in a neat little gender box that will be easy to deal with, we want everyone to fit into our other conceptual boxes. Otherwise life is messy and complicated, and you have to treat people as individuals with unique talents and needs. Much easier to just force them to pass...