I often think that we spend a lot of time talking about systemic oppression and exclusion, but the concept remains kind of vague and fuzzy for a lot of us. So in the interest of de-fuzzing the concept and giving specific, tangible examples to refer to when explaining this to friends or arguing with those in denial, here's the first of many posts on systemic exclusion and oppression. 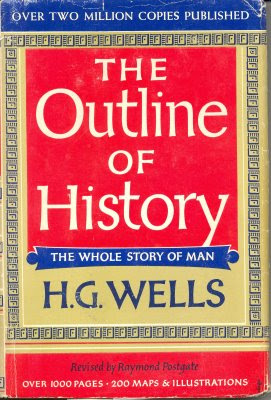 marginalized. Traditionally, a (usually white male) historian will tell The Story Of History as if it's all-inclusive and represents all the important things that have happened. Note in this book title we're told that this is "The whole story of man." This may be very well-intentioned and simply done based on custom and convention without a critique of what it means to be the whole story of man, or which persons are taken to be the important or central figures. From what I hear, this book by H.G. Wells is quite well-written and very even-handed. But the fact remains that telling one story, from one perspective, and representing it as all-inclusive is inherently othering to many.

First, the sort of God's-eye-view that this approach suggests is not possible. We're all humans who are fully situated in one time period and cultural context. We each have our own place in the overlapping network of hierarchies, and that position will inevitably inform our view of the world. Second, the project of telling a metanarrative itself suggests that there's just one history to which some figures are central while others are marginal or ancillary. In fact, there are many, many interlocking histories centered around many, many people. And the identity of the one(s) who gets to decide which history is The History will inevitably effect that history and permeate the story told with the privilege, cultural attitudes, and values of the teller. Thus the privileged traditionally own knowledge and history.

So one way to start eroding this system of exclusion is to consistently critique the metanarratives, and instead encourage particular, situated narratives. You can tell the story of your history, in your cultural and historical context, from your perspective. And that story will inevitably center your experiences and the experiences of people who share in your identity. But when combined with the stories of those of other backgrounds, we get a much more complete and multi-faceted picture of events, nobody's voice is privileged, and the norming/othering effect is greatly reduced.