Radical Leaders Prey on the Fearful and Naive

Today in OMG the Irony! and Read the Subtext, Folks! we have this: 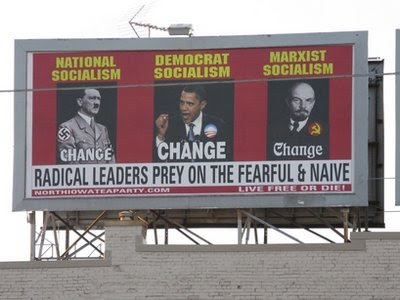 Brought to you by the Tea Party. The thing is, they're right. Radical folks sometimes do prey on the fearful and naive. Take the Tea Party for example. They prey on the fearful and naive by telling them that healthcare reform will kill them, and that our president is just like Hitler and some Communist dude. Ya know, cause they're all socialists, HAHAHA.

Except nobody seems to have gotten that this was the point of the billboard. Because, of course, it never was the real point of the billboard. The real point is implied, through a visual tool meant to invoke a strong emotional reaction. In our shared conceptual framework, Hitler and whoever that guy with the Communist symbol is were above all else mass murderers. And OMG! they both used circular logos, and Obama does too! This alone is proof of their ideological similarities, right?!?
When you compare someone to Hitler, you're suggesting that s/he supports genocide. When you put a picture of Obama between two pictures of political leaders that represent tyranny and mass murder in our collective understanding of the world, you're suggesting that Obama is also a tyrannical mass murderer. It's as simple as that.

And ya know what? That's RADICAL. And it preys upon the fearful and naive.