Swiss won't extradite Polanski on child sex charge I don't really know what to say about that.

On the oil spill front, the Coast Guard is now helping BP in efforts to prevent the media from photographing oil-soaked birds and other marine animals. Photographers have been banned from accessing sites where oiled animals can be found by boat and plane.

There's nothing to see here folks, move along or we'll have to arrest you.

A recent study found that love is like an addiction, and the pain associated with a breakup is similar to withdrawal from a chemically addicting substance. Some of the brain regions that are active while you're pining for your ex turn out to be the same as when an addict is craving cocaine or tobacco. The good news is that understanding the mechanics of this was actually helpful to some of the study participants, and talking about your situation helps, and of course time will eventually cure you of this particular problem. Which we didn't really need a fancy brain scan to figure out, but it's interesting stuff.

Monsanto is generously sending more seed to Haiti. Which is actually quite tragic. You see, Monsanto's hybrid seeds require toxic chemicals to make them grow, and you can't use traditional farming methods like saving seed from your harvest to plant the following year. These 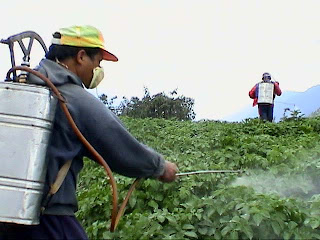 kind of seeds have to be bought new every year, along with the chemicals that make them grow. So, ya know, it's like an addiction. And Monsanto is feeding their particular brand of heroin to the farmers of Haiti right now under the guise of charity. Some fucking charity you've got there. To make matters worse, these genetically modified varieties often cross-pollinate with and thus replace the local, non-hybridized strains that some farmers may still be trying to use, so farming in a more sustainable way will effectively become impossible. Instead of fostering strong local seed banks and helping family farmers to be productive and giving them the support they really need (as many local NGOs have called for), this is our solution. This is how Haiti's one shot at establishing food sovereignty died in the womb. We've witnessed it folks.