"In the fall of 1999, the drug giant SmithKline Beecham secretly began a study to find out if its diabetes medicine, Avandia, was safer for the heart than a competing pill, Actos, made by Takeda ... instead of publishing the results, the company spent the next 11 years trying to cover them up..."
Source

"A Food and Drug Administration advisory committee Tuesday recommended that the agency withdraw its marketing approval of the blockbuster cancer drug Avastin for treating breast cancer, concluding that new trials showed no apparent benefit from the drug. ... The new studies presented to the panel failed to confirm those initial findings. The progression-free survival improved by as little as a month and, again, overall survival did not improve. In fact, because of complications from the drug, survival was actually slightly less for some women. ... In a statement released Tuesday, the drug's manufacturer, Roche subsidiary Genentech, said it stood by the data it presented to the FDA and that it believed Avastin 'should continue to be an option for patients with this incurable disease.' "
Source

Get that? So the drug not only fails to significantly improve your chances of survival, but it also has side effects that can hasten your death, and make life miserable with symptoms like high blood pressure and fatigue. But the company still thinks patients should be taking it. Why? Because there is only one relevant motivating factor here: profit. Patients be damned, we want to keep raking in our billions on this drug.

But beyond this feature of the pharmaceutical industrial complex is another disturbing trend. If you look at the way committee members vote in both the case of Avandia and Avastin, you'll see that nobody has clean hands here. 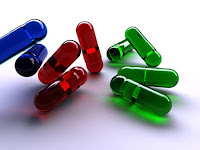 In the case of Avandia, the claim has been made that committee members who voted against the continued use of the drug had economic interests in pharmaceutical companies with competing drugs, while those who voted for it held SmithKline stock. So nobody appeared to be voting on actual results in actual people's bodies and futures and lives. No, on both sides it was all about the money.

So to answer a few questions I've received by email, that's why I call it the pharmaceutical industrial complex. When economic interests are the driving force behind a system that ostensibly exists to benefit people but instead ends up harming them for the benefit of those who stand to profit from that system, you have an industrial complex that has a momentum of its own and that will run you and your loved ones over without batting an eye or losing a night's sleep. Because what are a few heart attacks and early deaths compared to billions of dollars?