This PostSecret is incredibly depressing... 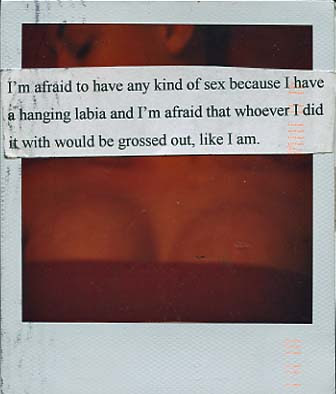 ...but predictable. I often wonder why in a culture where beauty standard are so rigid and so central, we don't give more thought to the wreckage that's churned out by the system. In this case, because a single, relatively small body part doesn't conform to the rigid standard, this person deprives herself of sexual contact and intimacy. Of course, rather then work to change the standard and the imagery that reinforces it, we simply offer new medicalized ways to "fix" the problem, and bring in a new source of income for one sector of the industry, thus enforcing the idea that it is a problem. Over the last few years, the rates at which patients are pursuing labiaplasty surgery has been increasing exponentially. According to one website

Women get labiaplasty for different reasons. In my experience, the number one reason for a labiaplasty is the desire to reduce pain or discomfort experienced while wearing tight clothing (such as jeans or yoga pants) or playing sports (especially bike riding or horseback riding) or engaging in other physical activities. The second most common reason for labiaplasty is shame or embarrassment about the way their genitals look and the desire to change their appearance. Other times, women want to increase sexual function-- a reduction of the labia or clitoral hood can provide greater exposure of the clitoris, allowing for increased stimulation. Occasionally, a woman's labia are damaged during childbirth, and the procedure is restorative.

I don't doubt for a minute that many women with larger labia do experience discomfort. But from what I've seen in internet discussions of the procedure, I would bet that many women pursue the surgery because of the terribly negative body image that accompanies large labia, while reporting that they want the surgery to reduce discomfort, as this is the more socially acceptable explanation. It's depressingly ironic that they live in a culture that both shames them for not conforming to a random and harsh body ideal while also shaming them for pursuing surgery for aesthetic reasons.