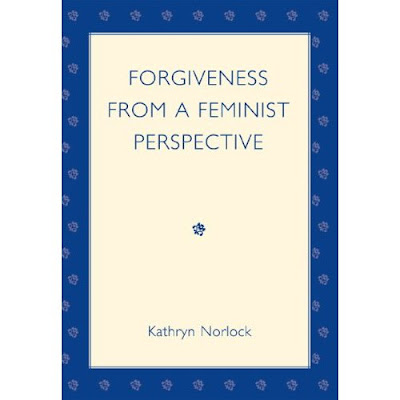 And excerpt from the review by Brittany Shoot at WireTap:

Norlock argues that despite what many philosophers have ignored in the relationship between gender and forgiveness, the act of forgiving is very much a gendered act. Women are overwhelmingly expected to forgive—not necessarily because they are more wronged, though that argument could certainly be made—and often, forgiveness is associated with a particular type of femininity, though Norlock is clear to separate “femininity,” “forgiveness,” and “weakness.” To deal with the blatant sex bias in forgiveness studies, Norlock debunks the historically gender-neutral approach to understanding the moral power, compassionate communication, and radical activism of forgiving.

Now that I think about it, I suspect that forgiving belongs in the same category as yielding your space to men, and apologizing excessively. As subtle markers of hierarchy, this kind of social behavior that is so deeply gendered merits special feminist attention, in my view. And I intend to give the topic of forgiveness some very special attention, just the minute I can get this book into my grubby little hands.