I've been trying to become more informed on the political situation in Iran, because current events there seem to have a significant impact on Iranian women, and to be impacted by women, or at least by the specter of female power in the minds of conservative politicians.

This article seems to explore the topic in an informative yet accessible way. According to William Beeman, an anthropology prof who has published books on Iran, Iranian leaders "really believe that the United States and Israel are trying very 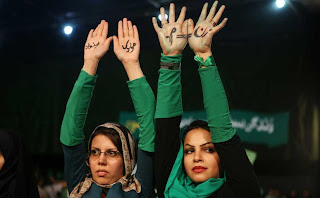 hard to undermine their governmental structure and trying to foment a revolution, a soft revolution." This comes in the form of a push for more freedom for women, as well as more openness to and dialogue with the West. And this push is largely supported by Iranian youth. Of course, electing a more progressive president wouldn't necessarily have much of an impact on these social issues, at least not right away, as the power of the president is very limited by the complex web of power relations in the Iranian government. But the fact that even the supreme leader, Ayatollah Ali Khamenei, has ordered an investigation into the election, shows that those who are pushing for change and reform are having a significant impact, in spite of state attempts to shut them down. And that's very encouraging.