First, I'd like to apologize up front if this post gets too math-geeky for y'all. I realize that not everyone's interest is piqued when they hear a reference to the methodology used to calculate the distance between the male and female means in mathematical testing measured in units of standard deviation... However, the topic of gender and performance in math is a really interesting one, and some recent studies have been done that suggest that gendered differences in performance in math are rapidly changing and equalizing in our culture, and in other cultures these differences never really existed. So the idea espoused by various members of the old boys club (I'm talking about you, Larry Summers) that these differences are innate are turning out to be completely unfounded.

One interesting thing about current studies on this topic, is that due to the increase in standardized testing in the U.S., there's a plethora of test result available at many different levels (elementary through high school) that are easily accessible to researchers. Another factor is the type of meta-analysis that has become popular that allows you to incorporate a large number of study results and test them for various things like weighted average effect size. Doing meta-analyses helps to eliminate (or at least reduce) errors that result from small sample sizes, regional differences, etc. so this kind of analysis is particularly useful on issues of innate vs. environmental factors.

One recent review of current research is Gender, culture, and mathematics performance by Janet Hyde and Janet Mertz. Two of the questions considered by Hyde and Mertz are:

Regarding the first question, meta-analysis on standardized mathematical testing in 1990 and 1995 showed that the mathematical performance for girls and boys tracked closely until they reached high school, at which point boys began outperforming girls by a small margin. But similar analysis done about 13 years later show that this performance gap has basically been eliminated. The authors note that this is most likely due to the increased number of female students taking the more challenging math and science courses.

But the second question that Hyde and Mertz raise are of special interest to me. I've been told, both by fellow engineering students back in the day, and by commenters on this blog, that my math teachers were justified in overlooking my mathematical ability because it's so terribly unusual for girls to be mathematically gifted. As if some statistical fact justifies silencing a particular, real-life student in your care and forcing them to assimilate, only to express great shock and wonder when they crank out a perfect score on the math portion of the SAT... but I digress. The idea is that, although it is the case that on average, girls' and boys' performance is very comparable, if you look at both ends of the spectrum (those who performs extremely well and extremely poorly) there are more boys than girls. But since the girls tend to cluster around the mean (at the middle in a normal table) and the boys tend to have roughly equal numbers at both extremes, they average out to be approximately the same. In case this is making no sense to you, refer to the handy visual aid below: 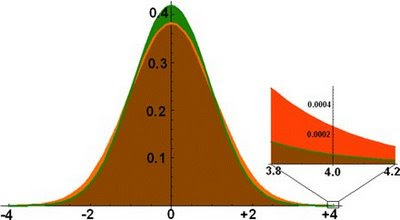 When meta-analyses of testing results are done on gendered variability, results vary depending on the countries that are included. In fact, in some countries there was no significant difference, while in others there was actually more variability among the females being tested. In addition, striking changes in the M:F ratio of mathematically gifted children in the U.S. correspond to the enactment of Title IX policies. All of this suggests that the differences are cultural rather than biological.

Current research provides abundant evidence for the impact of sociocultural and other environmental factors on the development and nurturing of mathematical skills and talent and the size, if any, of math gender gaps.

the U.S. also needs to do a better job of identifying and nurturing its mathematically talented youth, regardless of their gender, race, or national origin.

Big surprise, right? But it is nice to have statistical support for what some of us have been saying all along. Very nice.

Put that in your pipe and smoke it, Dr. Summers.

*Full text of the article, for those without institutional access.