On being "found in a compromising position"

My daughter is 3, and she's in that funny developmental stage where kids begin to appreciate the value of diversionary tactics when engaging in some forbidden activity, but they're not very sophisticated about it yet. Say she has a piece of candy that she's been told she can eat, but not until after lunch. She wants to eat it now. The solution is to take it in the bathroom with her and say she needs privacy to go potty. You know what's gonna happen as soon as that bathroom door closes. Or say she has a library book that she reallyreallyreally wants to color in with her markers, but she's already been prevented from doing so. Her solution at this point is to say "Don't look at me Mom! Go over there." And this tactic is so transparent that it's kind of cute and funny. Because she's 3.

On the other hand, when full-grown adults engage in these kinds of tactics, it's not really that cute or funny, although it's still pretty transparent. For instance, agricultural associations in several states (Iowa, Florida, Minnesota) are pushing through legislation to prevent images and video of abusive agricultural practices and 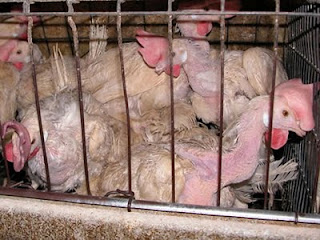 conditions from reaching the public. The proposed legislation would make it illegal to "produce, distribute or possess photos and video taken without permission at an agricultural facility" and, in some cases, make it illegal to lie on an employment application for an agricultural job if the employee's intention was to gather information on abusive farming practices. Because producers don't want to be "found in a compromising position."

In other words, the full-grown adult representatives of numerous grower's associations are straight up saying to the public "Don't look at us! Go over there." Instead of changing your practices so that you don't have anything to hide, just become better at hiding it, or use the politicians you've already bought and paid for to do it for you. No need to be sophisticated about it. No need to behave like mature or, for that matter ethical, adults. No, the diversionary tactics typical of 3 year-old children are perfectly appropriate here.

If you don't want to be found in a compromising position, then don't do things that have to be carefully hidden from public view. It's as easy as that.