The Cult of the Olympics

In our culture, the Olympics are sacred. We worship Olympic athletes, obsess over Olympic events, and spend exorbitant amounts of money on Olympic venues. And anyone who questions this obsession or the actions taken by local governments to protect the Olympics or the financial expenditure involved is depicted as irrational, paranoid, nitpicky, or even as a terrorist. Because what person in their right mind would question or critique the Olympics? Isn't that like critiquing Santa Claus or the Easter bunny? After all, opposing something that is Pure Good™ is a sure sign of irrationality, neurosis, evil intentions, or substandard intelligence. Right. So that's the mainstream media (read "dominant narrative") view of things.

So.... why would someone protest against the Olympics? Let's investigate.
Although hosting the Olympics is billed as a wonderful economic opportunity, it rarely ever actually results in an economic benefit 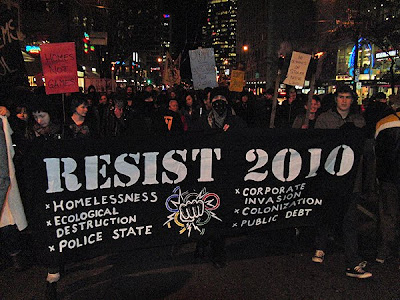 for the city chosen to host when all the costs related to hosting are factored in. It's estimated that around $6 billion has been spent in Vancouver. Note that this $6 billion comes from public coffers, and is therefore tax money that is being diverted from other uses (like education, healthcare, social services, infrastructure development, etc). It's hard to imagine that this $6 billion will be recovered in tax revenues and other financial benefits that are supposed to result from Olympic activity.
Vancouver has also cracked down on the homeless population in an effort to make the city more presentable. This is an unspoken part of the agreement made by a hosting city. All the images associated with the Olympics must be bright, shiny, and happy. No seedy underbellies exposed, please. Let's not let reality interfere with out little fantasy. We are the world, and all that. Beyond the social image that must be created, there's always an environmental toll. In this case, forest land had to be disrupted to build a new highway out to Whistler, and all of the land that the new highway and Whistler sits on is land that was taken from native populations. But maintaining the Olympic mystique requires that we ignore inconvenient little facts like this. Because that would tarnish our bright shiny happy image too. The maintenance of this image has resulted in the loss of civil liberties for locals, and the criminalization of law-abiding protesters. Heightened security and surveillance, the refusal to allow protesters from other countries to enter Canada, and the harassment of local organizers in their homes and workplaces contribute to this.
But in spite of these facts, which are easily documented and not disputed by any reputable sources, protesters are still constructed as crazy fringe people in our social dialogue. On Twitter this morning, the Olympic protesters have been compared to Nazis (because exercising your freedom of speech to protest social injustice is totes like committing genocide, you guys), called morons and dickheads and jerks, described as ignorant and "the kids picked last in gym class." Some tweets recommend violence against them and invite protesters to go jump in a ditch, or the river, to stop wasting our time, to stop disrespecting veterans, to stop ruining the dream or their own personal Olympics experience, and on and on and on.
It's interesting that nobody can actually engage with the claims of the protesters to honestly attempt to refute them. Instead all you see is one ad hominem after another. And whenever this is the case, it's a good indication that there is no good response. What if a representative of the Olympics, or one of the poor dears on Twitter whose Olympic experience is being destroyed by peaceful protesters were to just explicitly voice the claim that surely must be thought to justify all of this? What if someone just came right out and said "I know there's a large and heavy human cost that accompanies the Olympics, but it's worth all of that." What if they just said it out in the open like that? Well, the vast majority of the population that has bought into that implicit line of thinking might actually stop and think about it for a minute. They might question whether it really is worth the cost. And some people might decide that it's not worth the cost. And the Olympics would lose some of its mystique and cultural power. But we're very very careful not to allow that to happen. Because that's the thing about cults. They have built in mechanisms that protect them from critique and maintain their momentum and their psychological power.