National Day of the Cowboy

Apparently it's official, and it gives me an opportunity to sort out a whole range of thoughts and feelings I have toward the cowboy ideal, and it's role in our culture. 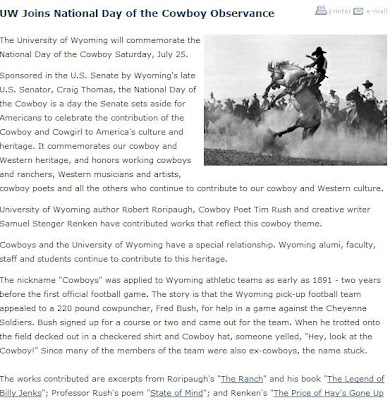 Since moving to the cowboy state a few years ago, and coming from a decidedly un-cowboyish background (not too many cowboys in Seattle and LA, even if you count the ones in the gay bars), I'm both intrigued and mystified by the cowboy ideal that saturates the culture in the western states (not as far west as where I'm from, but OK). At first I didn't take it that seriously. To me it was merely a mascot like all the rest. Huskies, Bruins, Aztecs, Cowboys, whatever. Of course I was irritated by the fact that "and cowgirls" is only occasionally tacked on as an afterthought and to avoid accusations of Title IX violations, but never taken all that seriously. But that's pretty much the norm everywhere you go, when it comes to collegiate sports.
However, it turns out that "cowboy" is so much more than a college mascot here. It saturates the culture at every turn. And don't let the inclusion of "and cowgirl" in the official wording fool you. Nobody's celebrating the cultural contribution of cowgirls here. Nobody's emulating cowgirls or imagining themselves to be a cowgirl when they drive their huge gas-guzzling truck that's never so much as touched a bail of hay or a roll of barbwire fencing, and strut around in their immaculate Ropers that have never kicked any turf other than the luxurious grass of their own front lawn and the city parks here in town.
But beyond the somewhat amusing role of the cowboy in the self-conceptions of many people here, the "Cowboy" image looms large as a way of life, a political stance, and a worldview. Cowboys are self-sufficient, rugged individualists, not beholden to anyone, in touch with the

natural world, not afraid to face the elements, completely dominant in their relationships with animals, not contained or defined by their fleeting relations with employers, the law, the "establishment," or any woman. They have a strong internal moral compass, and a simple view of morality, politics, and human relations. And this view of and fascination with cowboys is not limited to western states, although it's much more prevalent and tangible here. There are good reasons why images of Reagan and Bush on horseback and clearin' some brush were such useful political tools. The cowboy image is deeply ingrained in the American psyche.
But as far as I can tell, cowboys, as we idealize them, never existed. We've imposed our collective picture of what being a cowboy was really like over the historical reality to the point where we can no longer distinguish the two, and wouldn't if we could. And the end result is people fantasizing about and attempting to emulate something that never existed, and probably wasn't all that fantastic and ideal to begin with. In reality, the day-to-day life of a cowboy probably had much more in common with the daily life of a migrant farm worker than with the life we endow cowboys with in our imaginations. And who fantasizes about that? Working long hours in the heat and the dust for low pay and no respect and no job security and no pension and no health care and not even a decent place to call home only to be disposed of as so much garbage once you're too old to work. Sounds lovely, doesn't it?
So I can think of several factors that most likely contribute to the weight placed on the myth of the cowboy in our culture. First, of course, is the patriarchal ideal of manhood and individualism and domination of nature. In this ideal there's no need for inclusiveness or equality or consideration of the well-being of the disposable, marginalized members of society or the impact of human action on the environment. The marketing campaign would sound something like this:

Cowboy Country: where a man can be a MAN.

Second, there's a yearning for what's perceived as a simpler time and place. People feel entrapped by their mortgages and careers and insurance policies. But very few of us would actually have the courage to choose, or end up enjoying, a life without those things. A feature of civilization is a sharing of risks and the compilation of surplus resources to protect us in hard times. In the simple world of the cowboy, nobody shares your risk. If you get injured or your gear and horse gets stolen, you're on your own. Friends and neighbors might help you out, but they aren't obligated to, and may not be able to, and there's no institutional protection in place. Protection and security come at a cost.
Third, there's a sort of political view symbolized by the cowboy. Cowboys are live and let live. They take care of their own shit and expect you to do the same. They pull themselves up by

their own bootstraps and don't whine about their lot in life. They say what they mean and don't pull any punches. They walk the walk and talk the talk. It's this sort of libertarianism (Ron Paul is pretty popular in the cowboy states, y'all) combined with a simplicity and authenticity that's appealing to people, especially when our collective social ills seem insurmountable and our prominent political leaders seem so manipulative and disingenuous and self-interested. But it also goes hand-in-hand with a tendency to over-simplify things as a means of escaping the hard realities and the complexities of the real world. Sometimes life isn't fair and it's terribly complicated and hard to sort out and requires careful attention to detail and nuance. Sorting this stuff out and trying to be fair and inclusive requires some hard work and tough choices. And retreating into cowboy culture can be a means of denying these realities.
Finally, because the world of the cowboy is largely non-existent, taking on a "cowboy" identity amounts to a safe sort of play-acting. A "cowboy" in our world is an identity without a context - a Childe Roland who doesn't recognize that the world that renders his identity meaningful and coherent has long since ceased to exist. And it's fun and convenient to take on an identity without a context, because you can make of it what you will without the inconvenient constraints of reality.
So I say by all means, let's celebrate the Day of the Cowboy. If it's an excuse to enjoy the oh-so-fleeting-around-here summer weather and toddle out to the fairgrounds to look at some livestock (still a giant novelty to this city kid) and drink some lemonade and let the kids wear their cowboy dress-up clothes all day and listen to some live local music or ponder some local art, then that's all fine and good by me. However, I will be Celebrating the Cowboy with an ironic twinkle in my eye and a shot of tequila in my lemonade. Because, even though I live in cowboy country, I don't live in the world of the cowboy, and I have the balls to acknowledge it.