Usually when we hear the phrase "feminist icon" we think of women like Gloria Steinem. But I don't think the phrase should be limited to women who self-identified as feminists or were activists and academics. I think there are examples of feminist icons in many fields, who were strong and independent and forged ahead where women had never been before and did their thing in the face of the disapproval and criticism they received on a daily basis. So what if many of them didn't see themselves as feminist? They lived feminism every day, and opened doors for women in their fields. 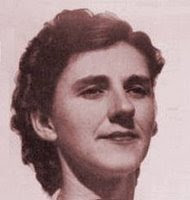 Adelle Davis. Adelle Davis was a nutritionist in the 40s, 50s, and 60s who lived a fascinating life and wrote many books that were foundational in the healthy eating movement. She was highly educated for a woman of her time period, earning an MS in Biochemistry in the late 30s. She was also widely criticized by other scientists due to her disparagement of the food industry, much of which was based on her research and experience treating patients with nutritional deficiencies.

And what I love most about the story of Davis is that many, many of the things she said and was criticized for are now being proven

and acknowledged by scientists. For instance, you might be familiar with all the hype about trans fats, right? Well, Davis was condemning hydrogenated oils and explaining the negative effects of trans fats on the body back when everyone else was extolling the benefits of margarine, and 25 years before other prominent scientists would even acknowledge the problems caused by trans fats. Similarly, she warned against preventing any sun exposure whatever on the grounds that your skin naturally produces vitamin D when exposed to the sun, and this vitamin D is more easily absorbed and utilized by the body than the vitamin D in supplements. Sure enough, now that everyone is properly trained to slather themselves and their kids down with strong sunscreens every time they step outside, ailments that relate to a lack of vitamin D are on the rise.

And the list of things Davis was right about goes on and on. She was the first to criticize processed foods with chemical additives and preservatives and recommend whole unprocessed foods. She recommended restricting daily intake of processed sugars and refined grains and instead advocated for whole grains, fruits and veggies grown without pesticides, and meat produced without hormones. In addition, her work anticipated the Atkins diet craze by 30+ years, only better, because she distinguished between simple and complex carbs and rightfully noted that it's the simple carbs (white bread, white rice, etc. rather than whole grains and veggies) that contribute to weight gain in those leading a sedentary lifestyle.

In all these ways Adelle Davis was a leader in the field of nutrition, as well

as being intellectually curious and productive, courageous, and a well-rounded, adventurous person. While some of the criticisms of her work are not unfounded, many were no doubt driven by misogyny and professional territorial motives. Davis appeared to be impervious to this environment, and continued her work unscathed during a time when college-educated women were widely expected to give up their work once they became wives and mothers. In my view, this makes Davis a feminist icon.