The Social Construction of Masculinity

I saw this truck in the library parking lot a few months ago, and took a picture, but forgot to post on it until now. Mostly because I'm avoiding posting on other, more substantive topics.

At first glance this truck just made me giggle, and try to figure out which of the men I had just seen inside the library was the proud driver of such a vehicle. I concluded it was probably shaved-head-goatee-tatoo guy. But there's a lot more to ponder here as well. 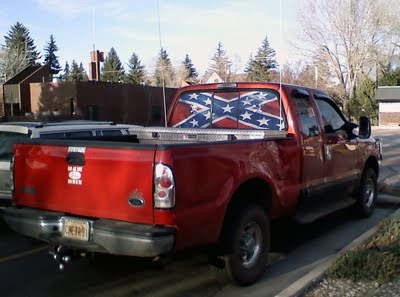 For one thing, there's the general feature of our culture which ties up one's identity with one's possessions - most especially one's vehicle. In many ways, you really are what you own/drive/wear. But this vehicle is especially striking because of what it says about the construction of masculinity in our culture.

First, obviously, there's the confederate flag in the rear window. I assume this is meant to firmly position this guy in the dominant racial group. It says "I'm the norm, and you're the other. So suck it." Or something like that. Or maybe it's just an anti-federal gov't or anti-governmental-control thing. Whatever. Either way, it's an assertion of individual power, a refusal to submit to authority or conform to current cultural pressures. It's a general symbol of defiance. Beyond that, check out some of the details here. That little decal under the handle of the tailgate says "Bad ass boys drive bad ass toys." Then there's the flame coming up from the Ford symbol, and the skull and crossbones on the back window. These I assume are all part of the message "I'm dangerous, bad, not to be fucked with." But the license plate is maybe the most interesting feature. It says "CHETR01." Because real men cheat? I'm guessing that's the idea here.

Of course, these are all integral parts of masculinity as it's constructed in our culture. Heaven help the man who doesn't conform. In fact, the less he conforms to these cultural expectations, the more likely it is that he'll feel the pressure to get a "bad ass" truck and put these kinds of messages all over it. Never mind how transparent the gesture is. It reminds me of people who have to go around constantly telling you that they're not racist. If you have to explicitly say it, so conspicuously, all the time, then perhaps there's a problem. In my experience, people who aren't racist/sexist/ableist/whatever, don't really have to tell you that, because their words and actions consistently reflect their underlying attitudes and beliefs. If there's no question that they are, then there's also no need to explicitly tell you that they aren't, right? So this kind of posturing in a man just leads me to suspect that deep down underneath it all, he really feels like a bit of a girly-man.

But this is more complex than the not-a-racist case, because the thing this man is aspiring to is problematic on its own. It's sad that there's so much pressure on men to conform to this ridiculous and stifling notion of masculinity. It's sad that those who fail to comply are so often viciously punished by their peers. And it's sad that we, as a society, ever got to the point where we thought this was a valid, positive identity for one sector of our population to aspire to. Like I've said before, patriarchy hurts men too. And here, in the library parking lot, is a startling, amusing, and sobering example of this dynamic.